A brief over-look of the history of Ivalice. These are based on the definitive records in the respective Ultimania of each game and in-game information. 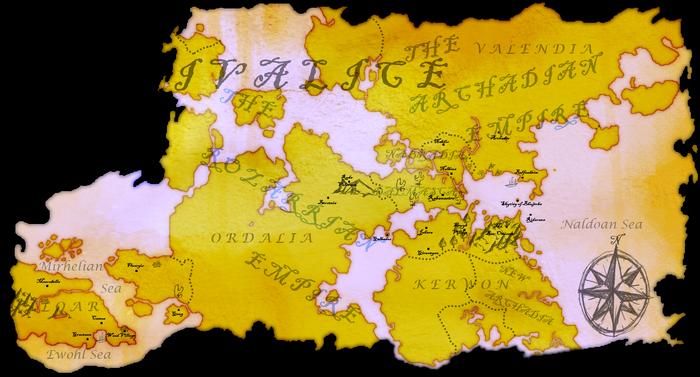 The Age of Myths[edit | edit source]

The Occuria worked upon the world of Ivalice. In their efforts they created the twenty four Scions based on zodiacs, with the scions split in half as scions of Light and Dark, tasked with important purposes. Some believe there is a Thirteenth Scion based on discoveries of ancient texts. The scions of Dark, as the tale goes, rose against the gods and were bound to the world, hence why only half the Scions appear as Espers. The creation myths of Ivalice are many, but one of the better known ones is as follows:

Before Ivalice was created, there exists two warring tribes of gods, the Fabar and the Danan. The war lasted for thousands of years, until the Prophet Matoya predicts the death of the Danan god-king Xabaam in the hands of his trusted blade. Xabaam fears his trusted General Ahnas to be the death of him, and imprisons him and his loyal followers into the darkest labyrinths. Ahnas implores the death-god Heth to free him in exchange for his own life. Freed along with his followers, Ahnas sought revenge.

Now Ahnas the Holy, he and his followers appeared millennia later upon the Fabar and battled against the Danan triumphantly. The Fabar god We'aka was intrigued with the strength of his vengeance and swore an oath to fight alongside his men. Battles raged on for countless millennia until Ahnas finally confronts Xabaam and defeats him.

While We'aka sought the head of Xabaam, Ahnas wished the Danan god-king pay for his misdeeds and immortalized Xabaam's body, transforming it into a great land and named it Ivalice. Now Ahnas the Shining, he and his followers then withdraw into the heavens, watching as Man lived and thrived upon Xabaam's eternal body.

The Age of Gods[edit | edit source]

Thousands of years before the Galtean Alliance was established, the Occuria ruled over all of Ivalice. While Man was just starting to thrive, the Occuria built imposing structures such as the Pharos at the Ridorana Cataract. However, for reasons unknown, the Occuria withdrew from their command into hiding in their own city Giruvegan, causing mass confusion throughout the world until a new age finally dawned.

Some believed that this happened because of the Thousand Years War incited by the twelve Espers, led by the corrupt Holy Seraph Ultima. Eventually the Espers were defeated, and the Occuria, wanting to ensure the Espers would not rebel again, tied their existence into glyphs and banished them to the dark reaches within Ivalice.

At the same time, the Aegyl Feolthanos defied the Occuria and sealed himself and his people on the Purvama of Lemurés to evade their wrath. In secret Feolthanos married a Viera, creating a subspecies known as the Feol Vier].

Time of the Glaciers[edit | edit source]

Ivalice is covered in ice, much like the ice ages of Earth. During this period many creatures adapted well to a land based way of life. Some creatures, such as the Croakadile, had a hard time surviving through the colder temperatures and their population dwindled. Eventually over all of Ivalice, glaciers begin to melt as the climate's temperature rises, flooding the planet. The sudden change in sea level killed many of landed species, and a number of surviving creatures, such as the Coeurl, were forced to adapt.

Vague records claim that magick was brought over Ivalice from an unknown continent, and into the hands of the Man. It is unknown if the Occuria had a hand in this or not.

The Light of Kiltia[edit | edit source]

1294 years before the Valendian calendar is established, The Light of Kiltia is founded. This religion proves relief for some people of Ivalice. Presumably, the religion is later related to the Church of Glabados, which worships Faram, the father, said to be at the head of the Kiltean pantheon.

Ivalice is at war. The Occuria, fearing Ivalice will be scarred even more, give the Garif a large piece of Nethicite, a weapon to set everything straight. The Garif are unable to use it, however. Angered at the Garif's incompetence, the Occuria came to learn of Raithwall's victory over Belias. Amazed, they gave the nethicite and a sword, to him. Taking only three shards off the larger nethicite, King Raithwall unites all of Ivalice. He would now be known as Ivalice's first Dynast King, and the founder of the Galtean Alliance. During this time, the Empires of Archadia and Rozarria rise. Both are great nations and expand quickly.

In Final Fantasy Tactics A2: Grimoire of the Rift, the Ruins of Delgantua are described as dating back to the Galtean era. This is further evidenced by the ancient stone architecture that composes the rooms and halls of the abandoned ruins.

The Dancer-Priestess Müllenkamp lives during this era. A practitioner of the darker arts of Kiltia, Müllenkamp amasses a following, creates many magical Grimoires, and founds the city of Leá Monde. The Blood-Sin tattoo on her back is passed down through her family after her death, and serves as the key to Leá Monde.

The Age of Technology[edit | edit source]

Centuries pass, and the Empires of Rozarria and Archadia are at war. Eventually, a truce is signed. The son of Emperor Gramis Solidor, Vayne Solidor, kills his father and takes over the Archadian Empire. He hopes to start a war with Rozarria and Archadia, and become Ivalice's new Dynast King. It is revealed he is being led by the rogue Occuria, Venat, who succeeded in shattering the control its kind had over Ivalice.

Vayne is eventually stopped, and killed, by Princess Ashe, along with the Sky Pirates Balthier and Fran, street urchin Vaan and his friend Penelo, and Dalmascan Knight-Captain Basch fon Ronsenburg.

A year later, the Purvama of Lemurés is revealed to Ivalice, along with the mysterious aegyl race. This sparks a great treasure hunting spree among Sky Pirates that a maddened Feolthanos attempted to take advantage of. The party that stopped Vayne Solidor, along with some new friends, manage to defeat Feolthanos and restore peace to Ivalice.

A few years Later, Luso Clemens arrives to Ivalice and joins Clan Gully. together with his friends, and with the help of Vaan and Penelo, they manage to defeat the demon Neukiah and save Ivalice.

The Cataclysm and the Age of Ajora[edit | edit source]

At some point, a great catastrophe hits Ivalice, wiping out many landmarks and even taking out the race of the Moogles. The other races disappear in this time. Man starts referring to the previous era as the Golden Era. He starts building again from the ground up.

In an age where airships and robots are commonplace, Pharism became the dominant religion of the Holy Ydoran Empire. At this time, a man called Ajora is born, and at the age of twenty starts to preach about the coming of Paradise. His influence caused unrest among the Pharist priests, and eventually, Ajora is caught and hanged by the Empire. After the execution, an earthquake happens, wiping out Ydora from the map. Some people take this as a sign from the gods, and start praising Ajora as a child of the gods. Over the next few decades, Ajora's tale would become twisted to make him seem even greater. The Church of Glabados was founded by Ajora's disciples, with Saint Ajora as its main focus. Pharism eventually fades away, with the Church of Glabados now the main religion.

The War of the Lions[edit | edit source]

Ivalice is now at war again, between two men are after the throne. This war would become known as the War of the Lions. In reality, the War is simply a means for a greater evil. The Espers, now calling themselves Lucavi, have returned, and want to rule all of Ivalice. To this end, they possess people, and use them to do their bidding. Even the great Ajora was being possessed by one, their leader, Ultima. It is unclear why the Espers have changed their name to Lucavi, or what their final ultimate agenda is. Using the War of the Lions, the current leader of the Lucavi, Hashmal, hopes to revive Ultima.

In order to do so, they need a lot of bloodshed to revive Ajora, Ultima's last host. They manage to revive Ultima, but a young heretic called Ramza stops them. Ramza is considered a heretic, and his old friend, Delita Heiral, is remembered by history as the man who ended the War. The only man who knows the truth, Orran Durai, is found and executed by the church as a heretic. Several decades on, Orran's descendant Arazlam Durai finds his writing and decides to write his story.

While not historically relevant, Luso Clemens appears during this time period but how he gets there is unknown. It may be speculated that he used powers of his Grimoire of the Rift to return to Ivalice in a different era once he is freed from his imprisonment.

Balthier from Final Fantasy XII also appears in this era, claiming to have been brought to Ivalice's future by the Cache of Glabados. It can be speculated that during his time as sky pirate, Balthier found a magickal artifact that transported him through time. This is further supported by his own statement at the end of Final Fantasy XII that he was going after the Cache of Glabados.

Previously, a Kildean priestess named Müllenkamp founded the city of Leá Monde. Her followers began to create a cult after her. As time passed, a man called Saint Iocus was born, and began prohibiting the use of magicks. The influence of the Iocus priesthood increases, and followers of Müllenkamp were hunted down in the Inquisition. Later, the prosperous city of Leá Monde is struck by a great earthquake, turning the city into a concentration of dark energy and lost souls. Riskbreaker Ashley Riot of Valendia goes to Leá Monde to stop Sydney Losstarot, a Müllenkamp cultist leader with an unknown objective to achieve in Leá Monde. Eventually, Ashley finds that the real dark threat is Romeo Guildenstern, who wants the power of the Gran Grimoire. Stripping Sydney of his power, he reveals that the entire city is the Grimoire. Ashley stops Romeo, and in turn is granted the dark powers of Leá Monde. Ashley continues on to become the vagrant, eternally saving lost souls who have become the undead.

Arazlam Durai, a descendant of Orran, discovers and reveals the truth about Ajora, the Scriptures of Germonique, and the War of the Lions.

Several centuries later, magic has completely vanished from the world, replaced by technology. There exists a small town by the name of St. Ivalice in the cold regions. A young boy called Mewt Randell bought an ancient book, in reality a grimoire called the Gran Grimoire. Looking at it with his friends Marche and Ritz, along with Marche's little brother Doned, the book recreates a dream Ivalice following Mewt's designs, who in turn is inspired by a Final Fantasy game and the grimoire's illustration. Marche eventually reverts the world back to normal, knowing it isn't healthy to live in a dream world.

Decades have passed. Mira Randell, Mewt's granddaughter, runs away to the abandoned school in the deserted two of St Ives, formerly St. Ivalice, while Mewt is at his deathbed. She finds a Grimoire, and is sent back in time to the Age of Technology, where the story of Final Fantasy Tactics A3 takes place.

Retrieved from "https://ffa3.fandom.com/wiki/Ivalice?oldid=4583"
Community content is available under CC-BY-SA unless otherwise noted.